Most Twitter user read the Story about Techchruch and the Twitter Documents get publish . Croll Hacker is the Name who  gained acces to differnt mail boxes of employees twitter like Evan Williams and his wife . That allow him acces to a bunch of info . He get acces to accounts Paypal Amazon ,Apple AT& T Mobile ME and Gmail.

A huge discussion start about ethik and jornalism .On my point of view Twitter or big Brands are like Publik Persons peopel whant too know what is going on specialy when it comes to sensitiv Security and Privacy its important to show the publik how unsave even a major Internet Service with millions of accounts is. Not that only the email acount get hacked Korben show that nealy all personal accounts get passwords hacked also like Even Williams Facebook Account and even the Registrar Domain Twitter ,he could at any time redirect twitter to any IP adress (or symply steal the domain name )

But for the most flippant ,the amount of inforamtion they could get on Twitter

But Among these info you can see things quite funny

Some very true words from Crow ,as a litle warning

“What I would say is that the larger are the biggest bullshit without them realizing it and I hope my speech will make them realize that no one is safe on the net . If Idid this it’s to educate those people who feel more secure than simple Internet novices. And safety that starts with simple things such as secret questions, many of whom are unaware of their real value or the impact it can have on their privacy if an attacker managed to circumvent them.

Now, clearly, we see by this demonstration of piracy it is very easy from a simple password guessed via a secret question back in other accounts (Facebook, Gmail and other) and enter the heart a business, both in accessing confidential data, but also a crippling business, simply by diverting a few domain names or admins accounts

In short words , continue to be paranoid. Do not use any security question, change the password for all your accounts, do not store documents online witch are too sensitive

In one short word , be carfull 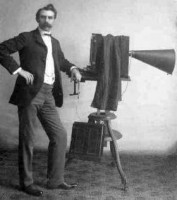 How a Blog can work for Filmmakers